29 November 2012 – my life took a significant change in the techno realm.

After nearly 5 years of a 24/7 relationship with my Blackberry, I ended it last night and moved to the android world. The blackberry opened a new world of free texting via PIN or BBM. We could surf the net (I mean we could check out websites), and we had the most wonderful QWERTY keyboard to type on.

Well, things started to change two years ago. The iPhone brought a new perspective to Smart Phones. Then came the Android Phones which made the Blackberry look/sound pathetic. There were many apps that were just not available to the BB. And even the basic regular stuff like Internet, Whatsapp, Bible, Google Maps were slow or lagged.

I was resistant to the change because I love the keyboard. My FAT fingers can’t handle touch screen. It was weird no matter how I twisted and changed the angle of that finger.

But the time has come. The BB died on me many many times the last 3 months. It hung and the data disappeared. Suddenly all the stuff that our iPhone and Android friends did seem very exciting. So yesterday, my husband surprised me with a Samsung SIII! The first thing I did was to download a LARGE keypad for the fat fingers.

I won’t bother with taking a photo of the Samsung or giving a verdict about the change. Afterall, everyone else save for the remaining few BB users are totally familiar with what we are missing out. 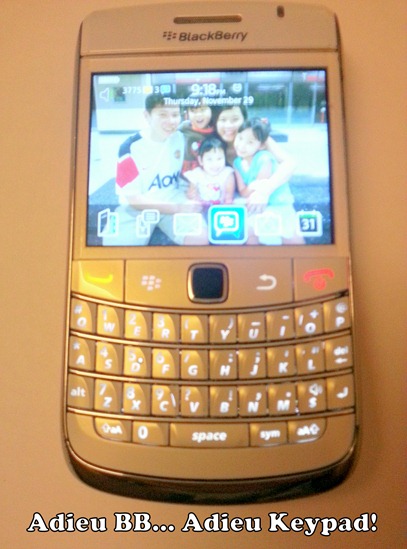