It’s Thanksgiving month! And today I wanna thank my domestic helper. God has been good to us. We’ve had two domestic helpers the last 7 years and both were different but VERY GOOD!

We’ve heard many horror stories about irresponsible helpers, lazy ones and some erm… not so brainy ones. I thank God that Aunty Jing is a super great help and truly a blessing to my family. 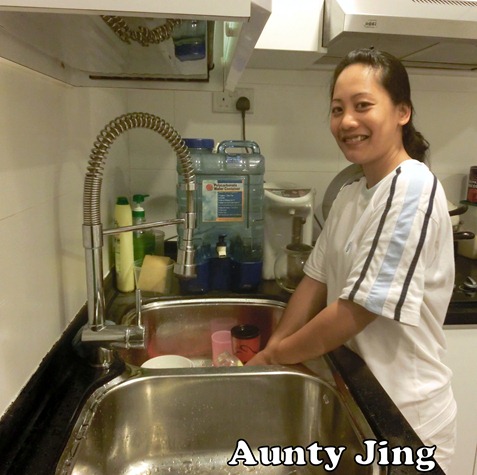 Aunty Jing is from Philippines, and she used to own a restaurant. As such, she’s a fantastic cook! She does wonderful western and local cuisines and always attempts new dishes. When we were watching a recent episode of Masterchef, Nathan asked, “Can you sign up Aunty Jing for Masterchef? She will win, you know!”

Alongside her cooking, Aunty Jing is great help when we go grocery shopping. She grew up in the agricultural industry, thus she’s really very good at picking out the freshest vegetables, sweetest and juiciest fruits, and the good fish and meat! I’ve never had a sour mango or tasteless apple since she came!

One of her responsibilities is to bring Nicole to her enrichment classes in the weekday afternoons. It sounds real easy. But that also means both of them have to brave the sun or rain and take public transport to the school, thereafter be back home and prepare dinner for the family; all these on top of her daily household chores. Of course the times when Nicole is in class means social time for her to chat with the new found friends she easily makes around the school. She gets her soul time, my kid gets to improve her math. I’m cool as long as she fulfils her basic responsibilities.

Bottomline, we love her and the kids adore her!

Then there was Aunty Wheng! She was our first domestic helper. She came when Nicole was 6 months old and she is now our family friend. Aunty Wheng is a trained nurse from Philippines, so she gave us invaluable help when the kids were sick, she knew what to do when there were medical emergencies like sudden rashes or severe vomiting.

Aunty Wheng wasn’t chatty. She was very focused on finishing her tasks and devouring the books we had. She read a lot, not only to herself, but to the kids too. She toilet-trained Nicole when she was only 2 year old! 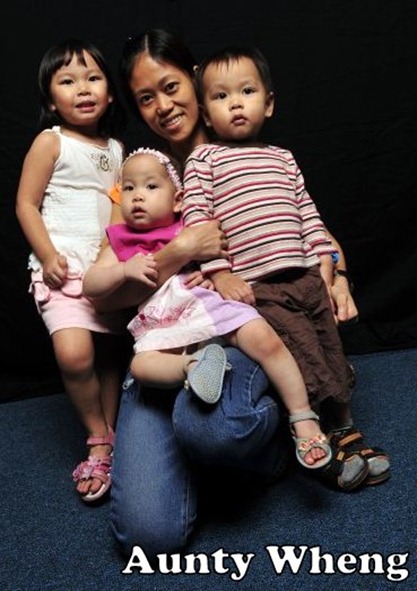 When she was with us, she attended church with us, settled in a Filipino cell group, went for meetings and prayer meetings on her off days. After 3 years, she left for Canada to pursuit her dreams of being a nurse there. We all cried when she left. In fact, Nathan, who was the most attached to her, went on a food fast for five days after her departure. He refused to eat anything other than drinking milk! You can ask him which country would he like to visit and Canada would be one of them!

Both Aunty Wheng and Aunty Jing are not perfect. One is a melancholic and gets moody. The other is super sanguine who has a short temper. Both are not great housekeepers. Both have overslept before, damaged some equipment or clothing before. But both were answers to prayers we made. This was exactly what we told God about each helper. We prayed that each would:

And that’s how it turned out each time! Both of them became invaluable help. We have family and friends who have commented on how blessed we are to find such good help each time.

I thank God how He has given us wonderful helpers, that I can have the peace of mind to go to work or play and know that I can come home to a clean house and good meal.

Do you have people you wanna give thanks for? They can be your closest family to the neighbour across the street to the bus uncle. Take some time to give thanks this month… We always love to read about any blessing big or small. And everyone loves to be thanked!

Here’s how to do it:

1 Response to Give Thanks-My Domestic Helper